If you build it, they will come – ‘they’ being all of those who will keep what you built working properly. And for the wind industry, they have arrived, the many companies emerging to operate and maintain the more than 318 GW installed worldwide.

True, operations & maintenance (O&M) may not sound like a sexy industry. But when it comes to industry growth and trends, wind O&M is an exciting space right now.

Why? Consider the numbers.

Worldwide wind installations grew by a cumulative 26.2 percent over 18 years, with a particularly strong uptick since 2009 (Global Wind Energy Council).
Manufacturer warranties usually run from only two to five years of the typical 20-year lifespan of a wind farm.
Those warranties have expired on more than half of the wind megawatts now operating, (Navigant Research’s “World Market Update 2013.”)
With warranties ending, wind farm owners are left to figure out what to do about O&M. Voila — a huge market opportunity for those who can maintain and fix turbine gear boxes, generators, rotors, brakes and other parts of the wind turbine.

This offers a new revenue stream for an industry whose manufacturing and development sectors suffered a setback with the world economic downturn.

Growth of Global Onshore Wind Market for O&M, in Warranty and off Warranty: 2013-2023. Credit: Navigant. 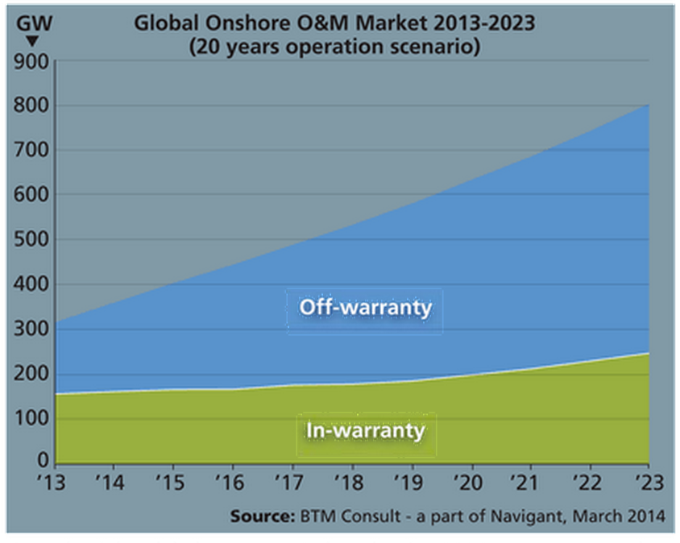 A few different O&M business models have emerged. Wind farms nearing the end of their warranties must decide which model will serve them best.

In some cases, utilities and wind farm owners re-sign contracts with the original equipment manufacturers (OEMs). In other cases, they develop in-house O&M operations. Still others contract with the growing number of independent service providers forming around the new industry.

Many familiar names in wind equipment manufacturing are trying to capture pieces of the O&M market. Among them are Enercon, Gamesa, GE Wind, Goldwind, Nordex, Siemens, Suzlon Group, United Power and Vestas, according to Navigant.

“The O&M market is hot right now,” said Dalen Copeland, director of business development for EDF Renewable Services. “There have been, and there will be, at least through the end of 2015 when the PTC is no longer available, a lot of assets installed in the U.S. and the rest of the North America.  And there has been significant growth over the last few years in the renewable assets installed and therefore coming out of warranty soon.”

EDF Renewable Services operates in North America and plans to expand into South America. The company has been in the O&M business for more than 25 years, initially because turbine manufacturers weren’t interested or able to perform O&M on all of the turbines they sold, according to Copeland.

“We’ve stayed in the business because we think we offer a unique alternatives to owners who want OEM level stability and sophistication of service, but with the transparency that comes from a company that isn’t married to a particular technology. In other words, we can tell an owner when we think a machine is underperforming because of a design or installation issue,” Copeland said.

The company now provides O&M for 8 GW, not just wind but also solar, biomass, and biogas.  With 500 technicians, EDF Renewable Services performs a range of services from pre-commissioning support through end-of-asset-life care, including scheduled and unscheduled turbine maintenance, balance of plant maintenance, remote monitoring and resets from its operations and control center, engineering and SCADA support, and asset administration.

Several independent service providers also can be found in Europe and Asia, among them the Netherlands’ Bettink Service Team and Green Energy Services; Spain’s General Power Services and Weir, YES and Greece’s EN.TE.KA, according to Navigant.

Navigant points out pros and cons for wind farms to consider in deciding whether to go it alone, or contract with a manufacturer or independent.

Going it alone allows the wind farm to maintain control of the asset and fully understand its O&M costs, which could lead to savings. On the other hand, performing O&M means that the wind farm’s business operation is now more complex.

Equipment manufacturers are a good choice because they have access to spare parts and proprietary data. But their services can be expensive over the long term. Independents tend to price competitively and are drawing experienced employees, but they often do not have the same access to data and supplies as the manufacturer, and they may be small and undercapitalized, according to Navigant.

Duke Energy, the U.S.’ largest electric power holding company, adopted two of the options simultaneously. The company made the decision to keep its services in-house, but also go with an independent service provider. It did this by acquiring Outland Energy Services, a Minnesota-based independent since 2005. It has since folded Outland into Duke Energy Renewables.

The company maintains Duke’s fleet of 15 wind farms, which have an installed capacity of 1,700 MW (and another 400 MW of capacity under construction), representing a $2.5 billion investment.  And at the same time, it also handles O&M for about 300 MW of outside wind farms. For example, Duke recently signed a long-term deal with Consumers Energy to service its 105-MW Cross Winds Energy Project, under construction in Tuscola County, Mich.

“We see this market in operations as a strategic part of our business model,” said Greg Wolf, president of Duke Energy Renewables. “We see opportunity.”

He added that Duke’s first priority is to ensure that its wind operations are operating at best performance and at least cost. Because its fleet is so large, it enjoys scale in the market, and offers its O&M customers the benefits of that scale.

“Over the past 18 months we’ve positioned ourselves uniquely in the marketplace. We focus as an asset owner on the production and safety of our workers. We can translate that over to our customers, who don’t necessarily have the same experience and understanding of the assets that we do,” added Jeff Wehner, vice president of operations, Duke Energy Renewables

Duke also works on a range of technologies, while many other companies specialize in one or two, Wehner said. The services range from short-term a la carte arrangements to long-term contracts where Duke controls a facility’s operations.

One of its most interesting services involves a monitoring station located at Duke’s headquarters in Charlotte, North Carolina.  The station remotely watches Duke’s wind farms around the United States, as well as those under contract.

On the screen in Charlotte, Duke can spot and troubleshoot problems on any of the given wind farms. Sometimes they can fix the problem from the monitoring station, if it involves resetting equipment, for example. Other times they contact onsite technicians, or Duke’s mobile team, to undertake the repairs at the wind farm.

“What we really try to focus on is condition-based maintenance. There are all sorts of monitors on these turbines. We look at things like temperature and vibration and hopefully find issues before they become bigger issues,” Wehner said.

Meanwhile, an entirely different route is being taken by the North American subsidiary of China’s giant wind company Goldwind. Wind farms that use Goldwind’s turbine need far less O&M than most because the machines operate under a direct drive system. That means no gear box, which is the most maintenance-heavy component, according to David Halligan, CEO of Goldwind USA.

“It’s about efficiency, getting costs down, lower maintenance, and a lower labor requirement,” Halligan said.

A Goldwind turbine achieves a 20 percent savings over its lifetime on O&M because of the lack of gear box and other efficiencies built into the machine, he said.

Further, because the machines are direct drive, they are well-suited for distributed generation. They do not require a grid connection to excite a generator; the turning of the rotor excites the generator. As a result, Goldwind turbines can be found serving food processing plants, waste water treatment facilities and similar large energy users that are located in windy places and may want to go 100 percent renewable.

Clearly, the O&M industry is a big new big play – whether it’s the approach of EDF Renewable Services and Duke to better service the machines – or the positioning of Goldwind USA to provide machines that can be serviced less.

After years of development, a massive fleet of wind turbines are whirring. Now it’s time to make sure they operate as effectively as possible for as long as possible.  A new and growing O&M industry is rising to the occasion to get the job done.

Growth of Global Onshore Wind Market for O&M, in Warranty and off Warranty: 2013-2023